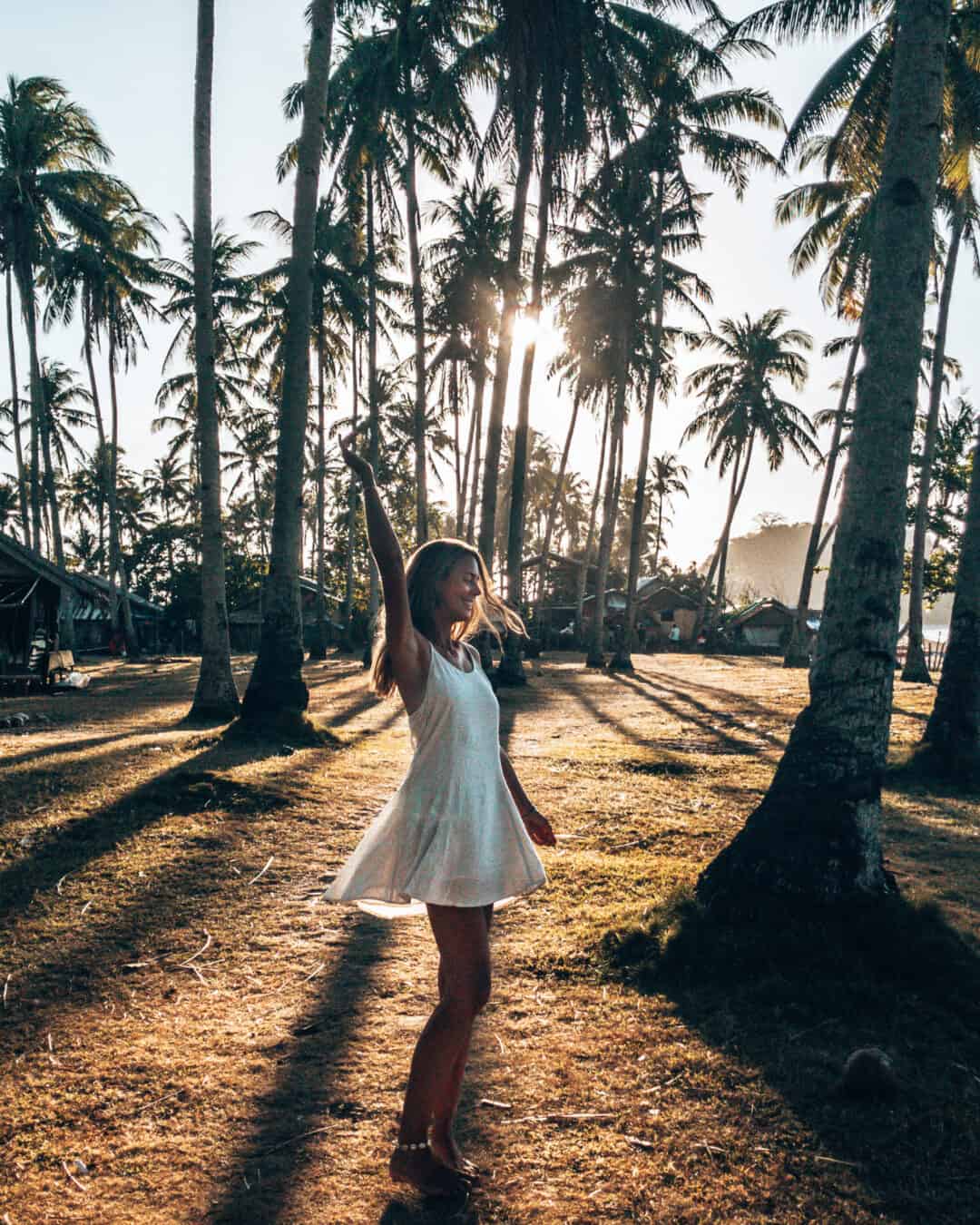 El Nido is located in the northern part of the Island Palawan. It is well known for its fantastic Island hopping with beautiful lagoons and small paradise Islands. But besides that, El Nido offers some of the most amazing beaches and clear turquoise waters on the Island itself. It was one of our favorite places in the Philippines and should not be missed when visiting this beautiful country.

Best time to visit the Philippines

The best time to visit the Philippines is between November and April because these are the dryer and colder months. The wet season starts from Mai until October brings a lot of rain and hotter temperatures. However, the tropical weather in the Philippines is very unpredictable all year round.

We visited the country in February, and we had rain regularly. But it usually lasted only a few hours. Be prepared that the weather can change very quickly. It can be the most beautiful sunny day, and an hour later it is raining heavily. Another hour later, it may be perfectly sunny again.

How to get to El Nido

There are two ways to get to El Nido. Either by ferry from Coron, which takes you around 4 hours and costs 35$ per person.

If you come to El Nido by airplane, you can either fly to Lio Airport which is located a 15 min drive from El Nido town or the airport in Puerto Princesa and drive to El Nido by bus, which is a 4-5 hours journey.

Visa to enter the Philippines

Most nationalities can enter the Philippines for 30 days visa-free. If you want to extend your stay, you have to apply at an Immigration office. You can find all information here.

Las Cabanas Beach is definitely one of the best beaches in El Nido. It is located only a few minutes ride out of town, and it’s a beautiful white sand beach with some beach bars which make it the perfect place for sunset. We loved to enjoy the sunset at Beach Shack and play with the cute puppies at the beach.

It is possible to swim here, but you have to walk out quite a bit until the water gets deeper, and there are a few parts with rocks. We usually walked along the beach and turned around the corner where we found a much more quiet part of the beach. This side of the beach is also better to enter the ocean. We found a beach swing in this area and some trees where we could sit in the shadow. 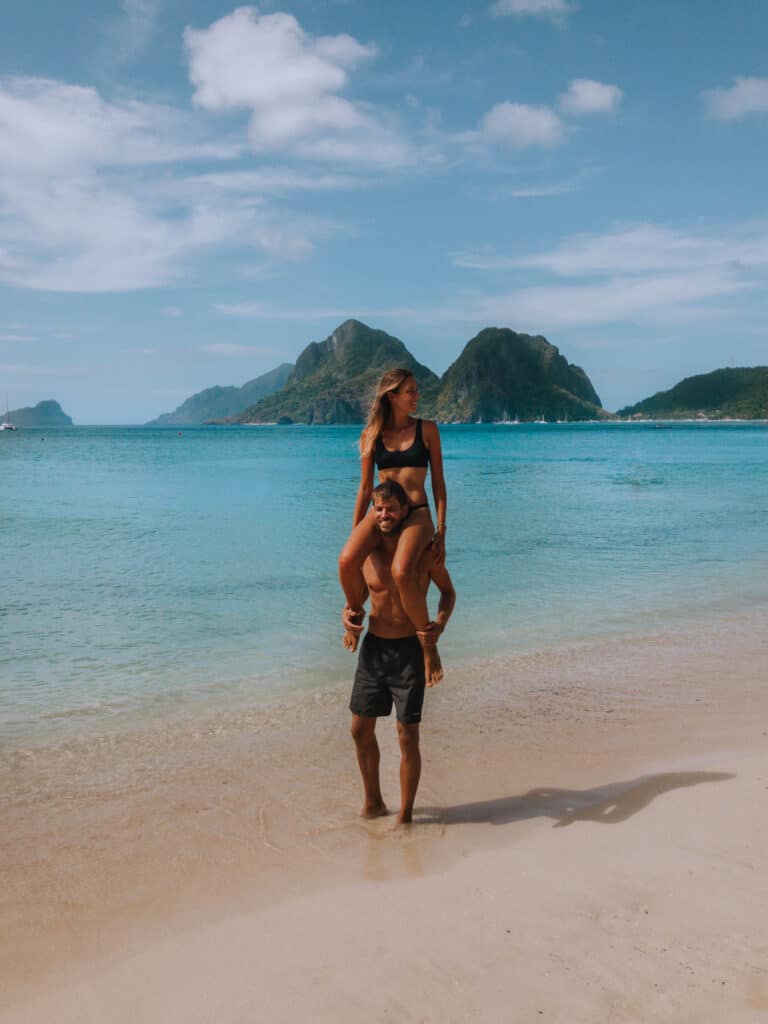 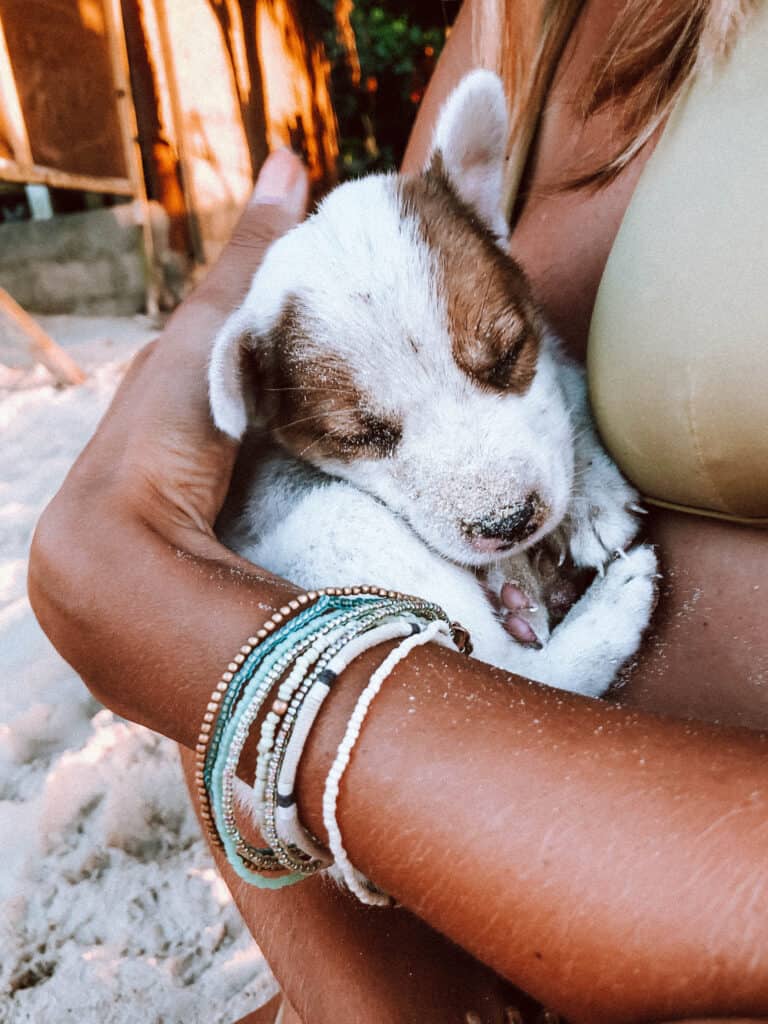 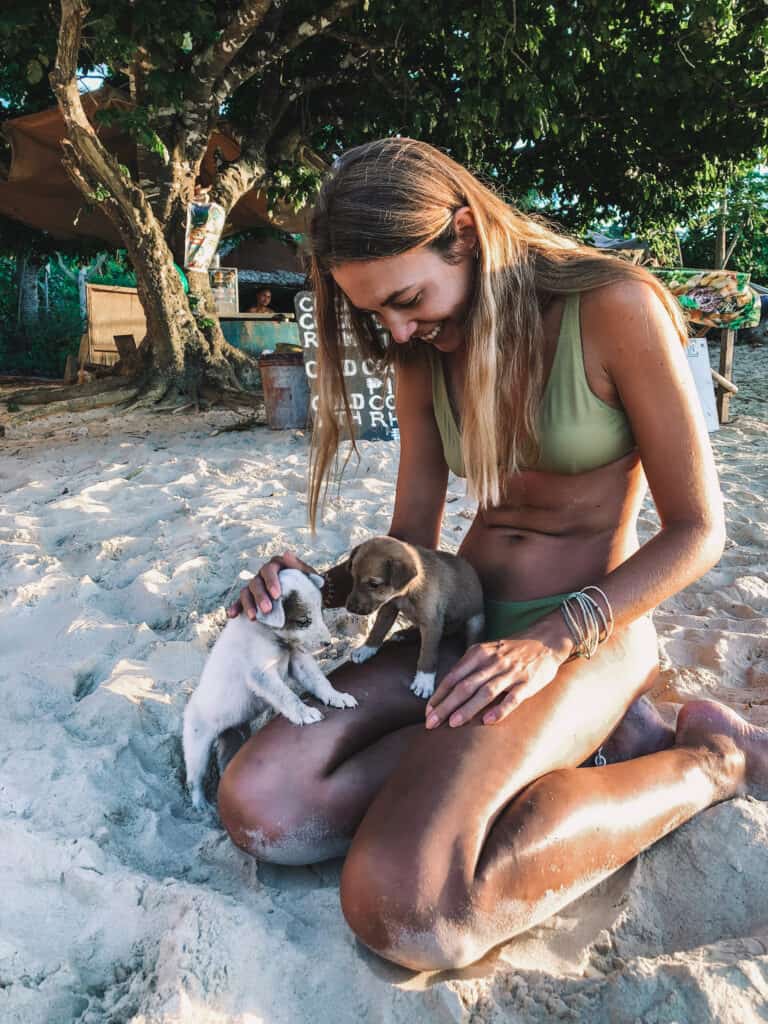 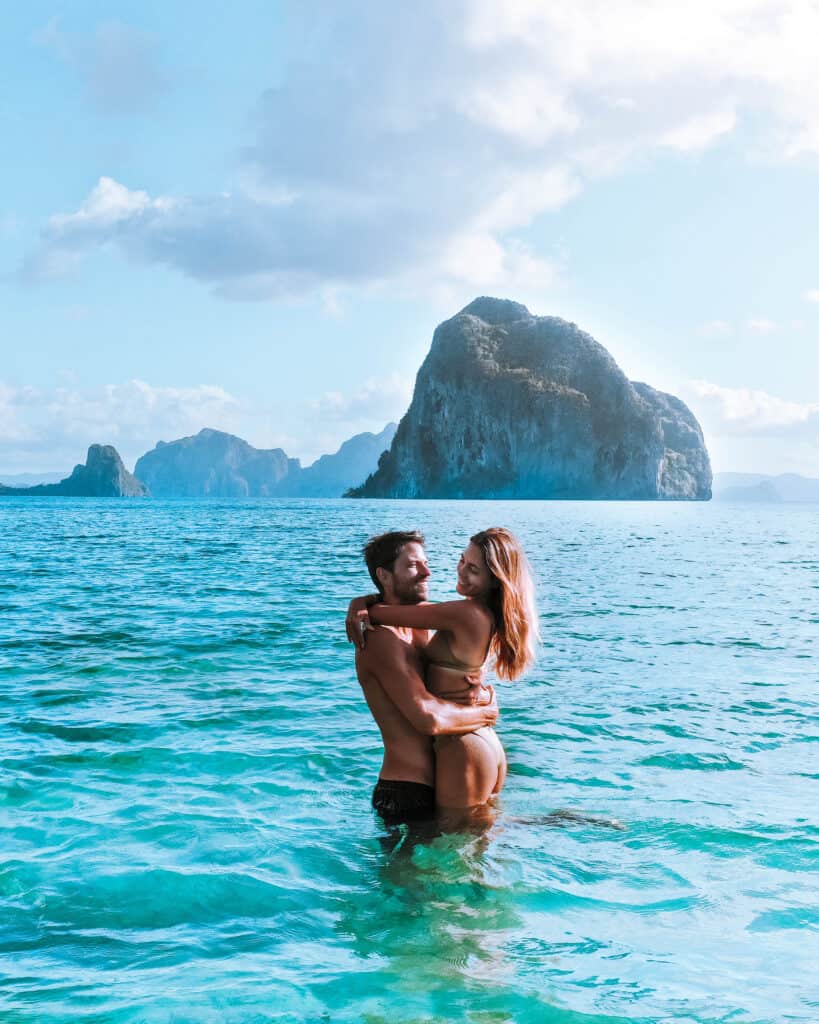 Corong Corong beach is not a very beautiful beach, but it has its charm. It is the beach where all the boat tours leave for Island hopping. It’s a nice place for a walk along the beach and to watch the sunset too.

You can rent a Kayak at the beach and paddle to 7 Commandos beach from here, which is usually included in the Island hopping tour A.

Island hopping in El Nido with a private tour

Island hopping is an absolute must-do when visiting El Nido. It is one of the most beautiful places in the world with small white sand beaches, lagoons, crystal clear water, and towering limestone cliffs.
Read now 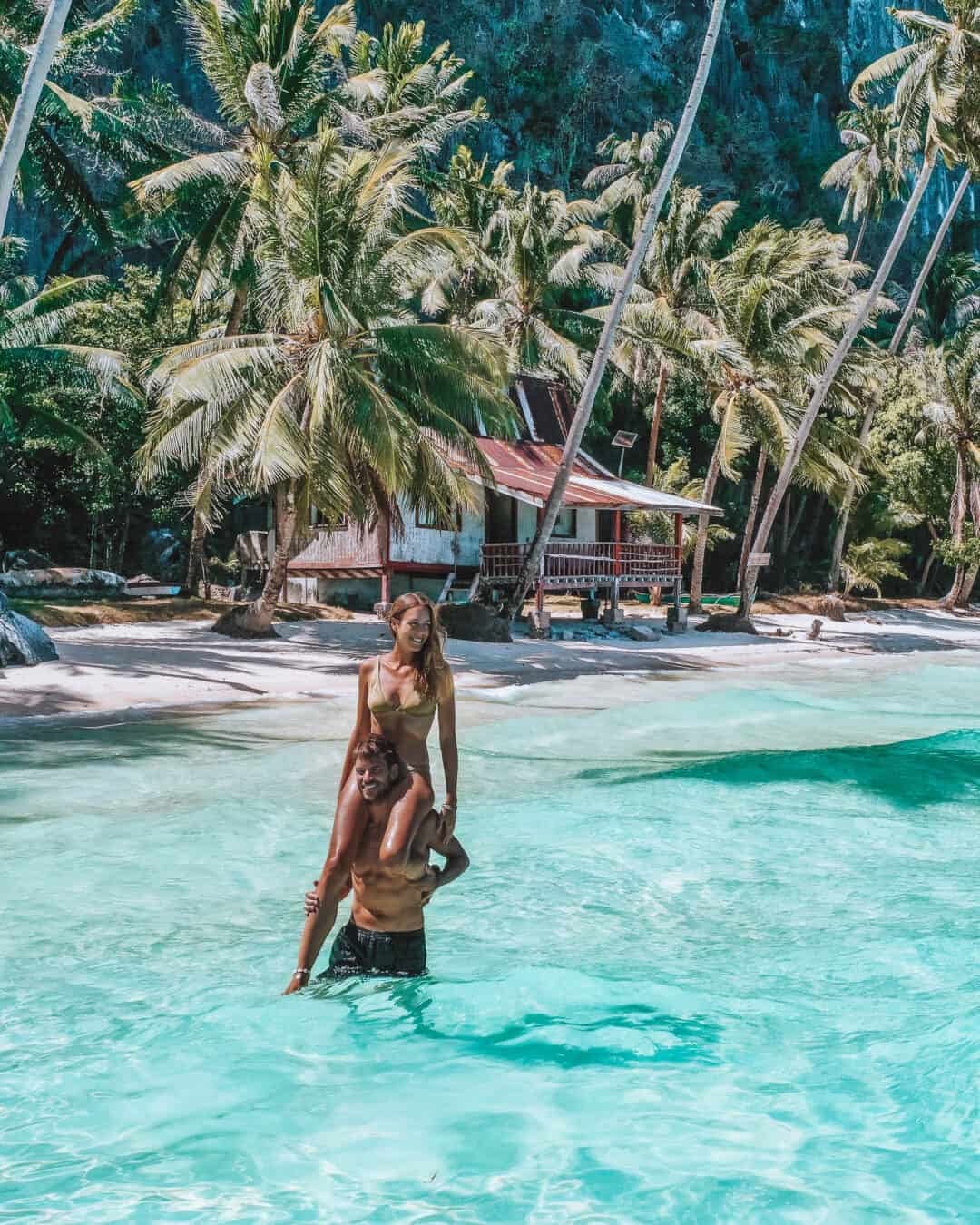 Lio Beach is about a 15 min drive from El Nido town, and it’s a beautiful beach to relax and swim. When you arrive at Lio beach, you will find parking for your scooter, and there are a few beach restaurants. One of them was our favorite breakfast restaurant Shaka Cafe with the most amazing smoothie bowls. 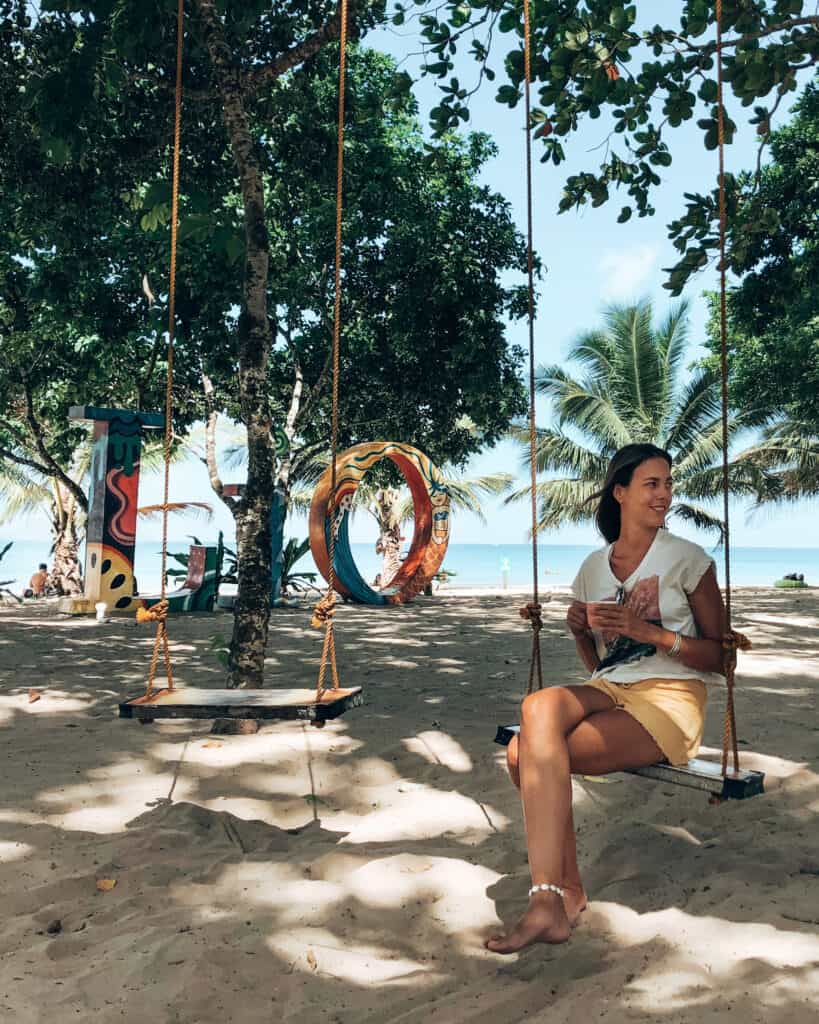 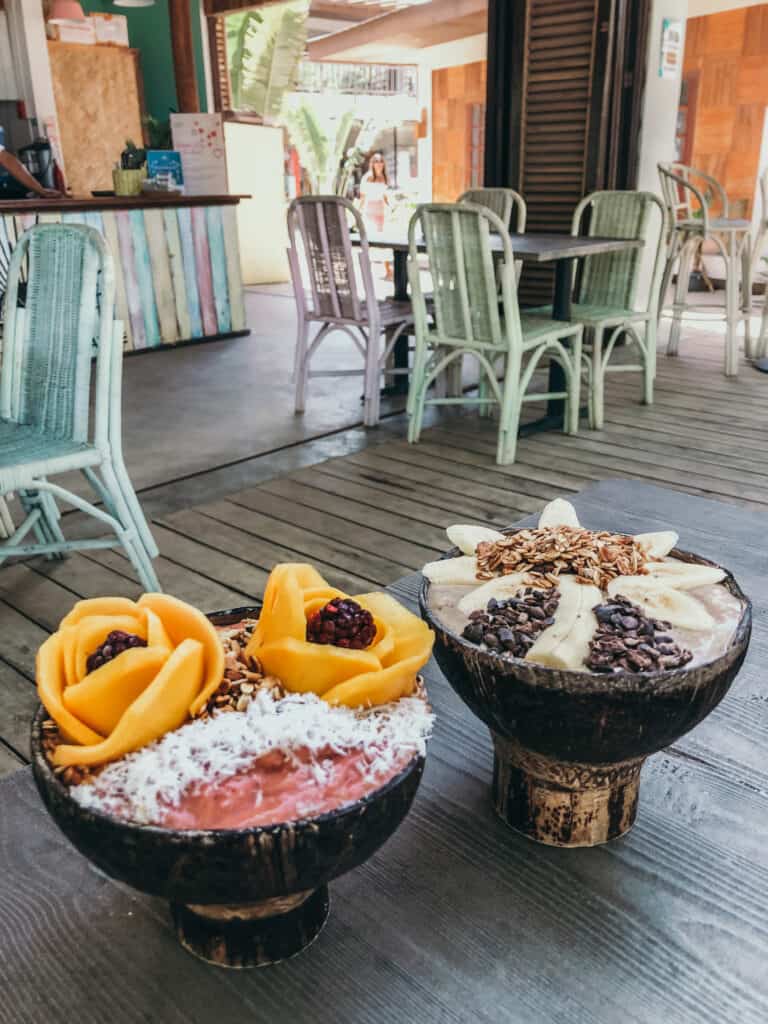 Nacpan beach is one of our favorite beaches we have been in the Philippines and can’t be missed when listing the best beaches in El Nido. This beach has quite a vibe that you immediately get to feel when you arrive. It’s a long white sand beach with several beach bars and hemmed by palm tree forest.

Our favorite beach bar was Mad Monkey. We loved to drink a coconut and enjoy the sunset from here.

Nacpan beach is about a 45 min drive from El Nido. We went there by scooter. The roads in El Nido are good, and it’s only the last part, which was a bit bumpy. There are excellent accommodations around Nacpan beach too like Nacpan Beach Glamping. Next time we would consider staying here for a few nights because we loved this area. 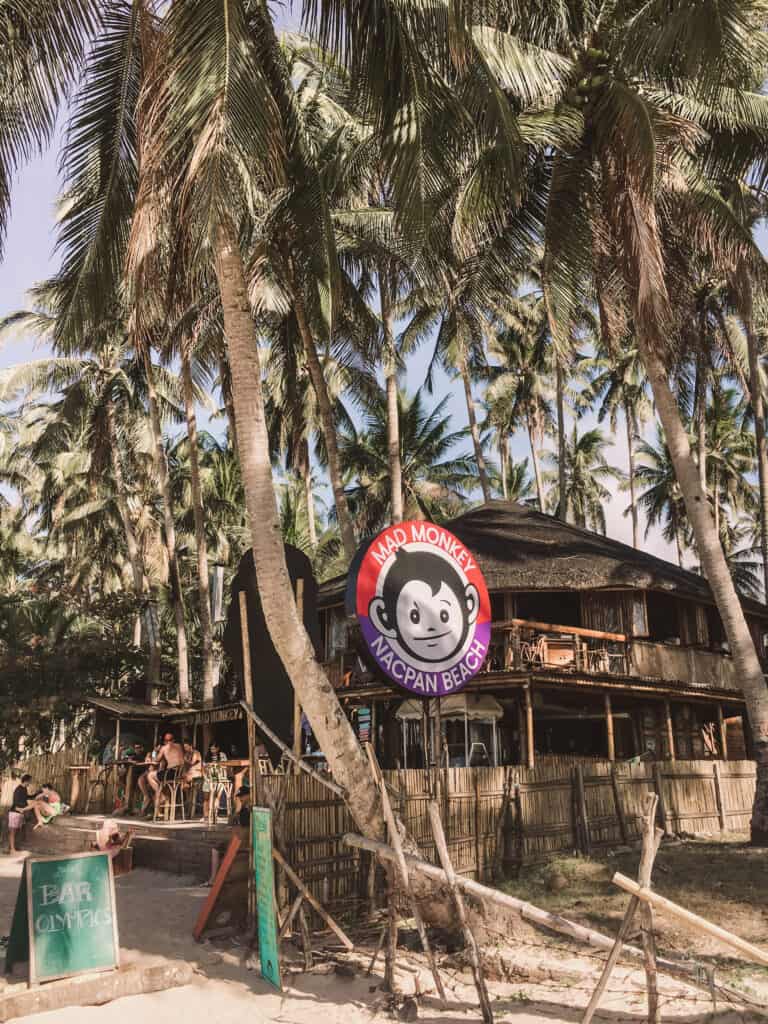 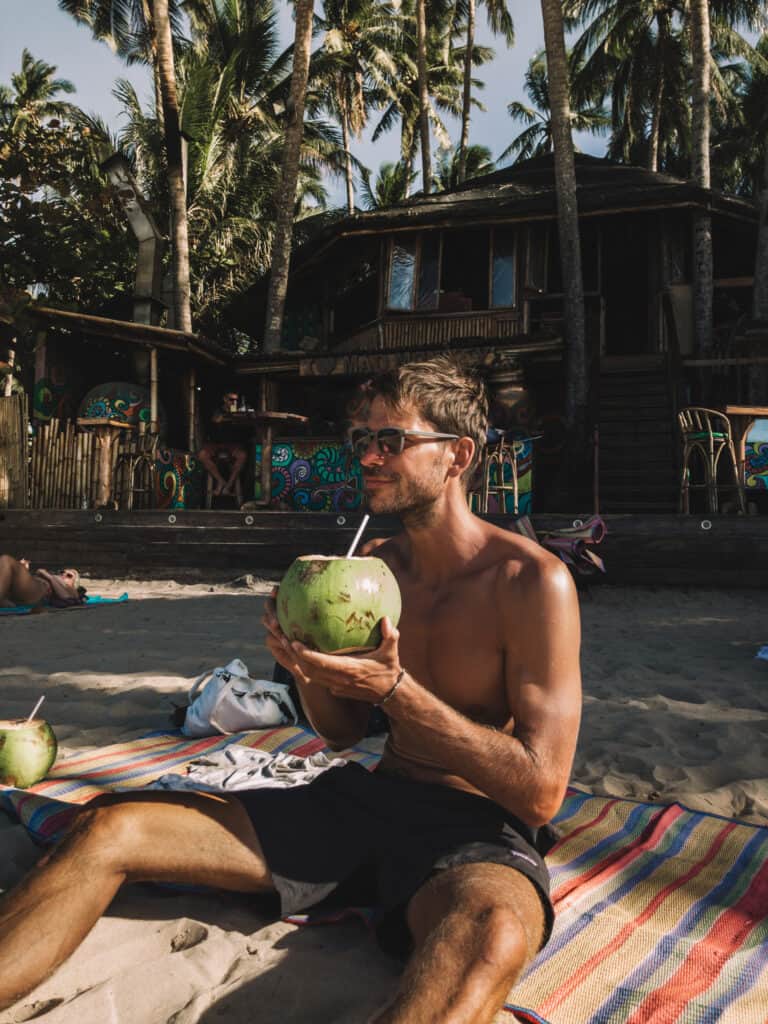 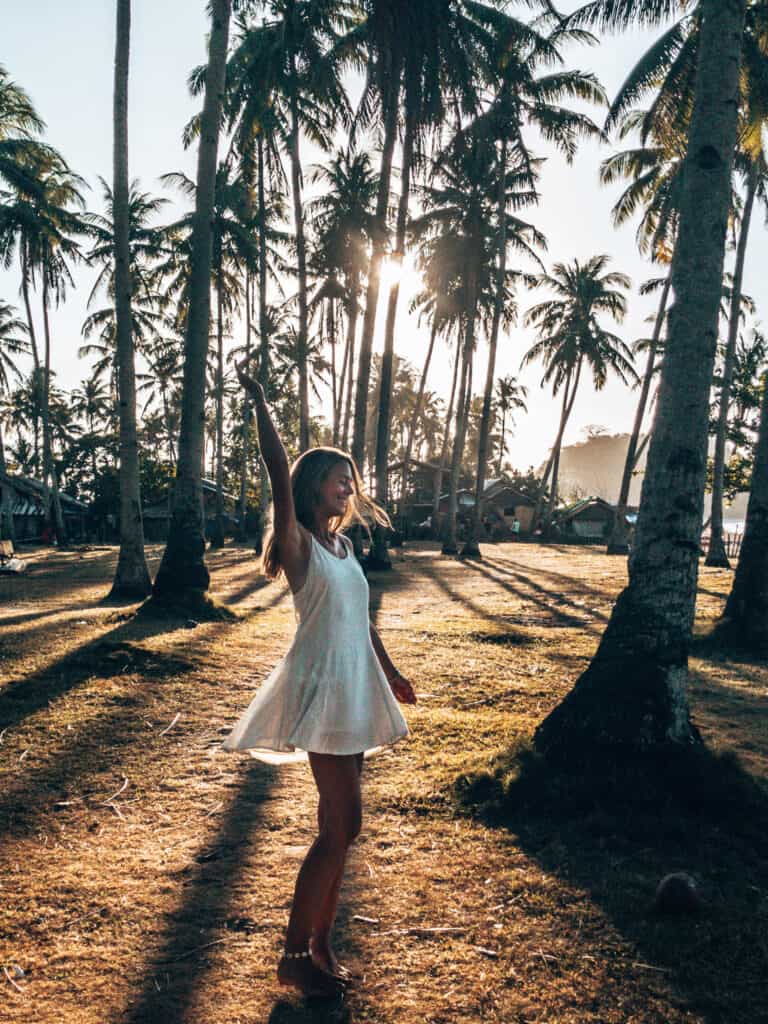 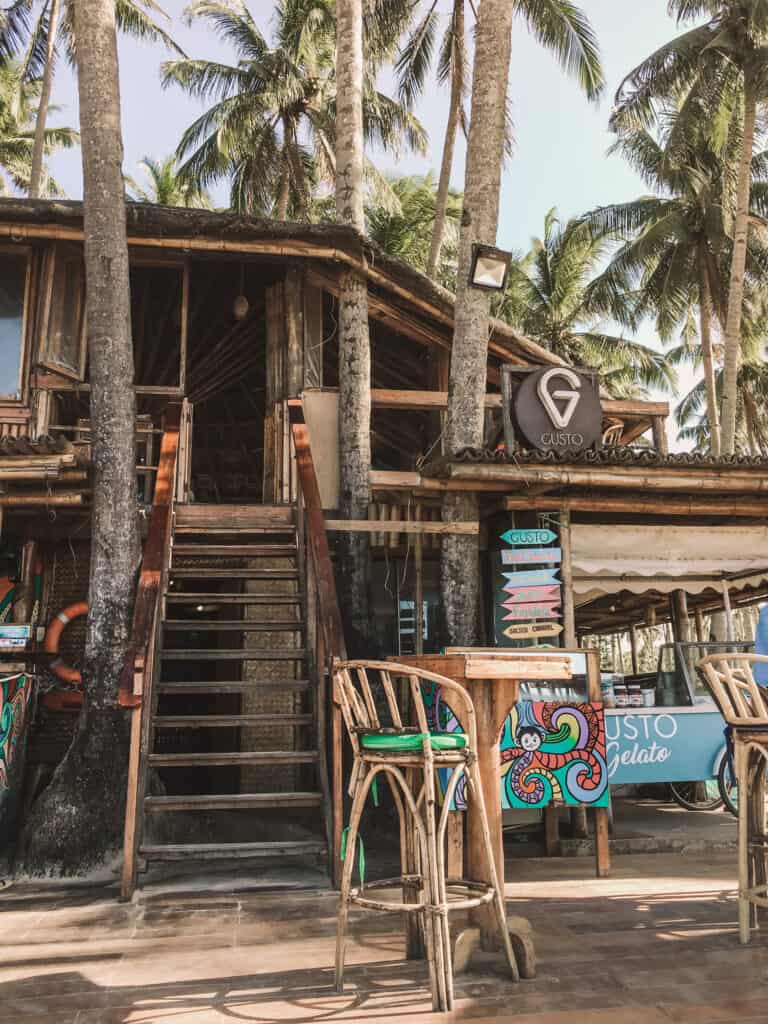 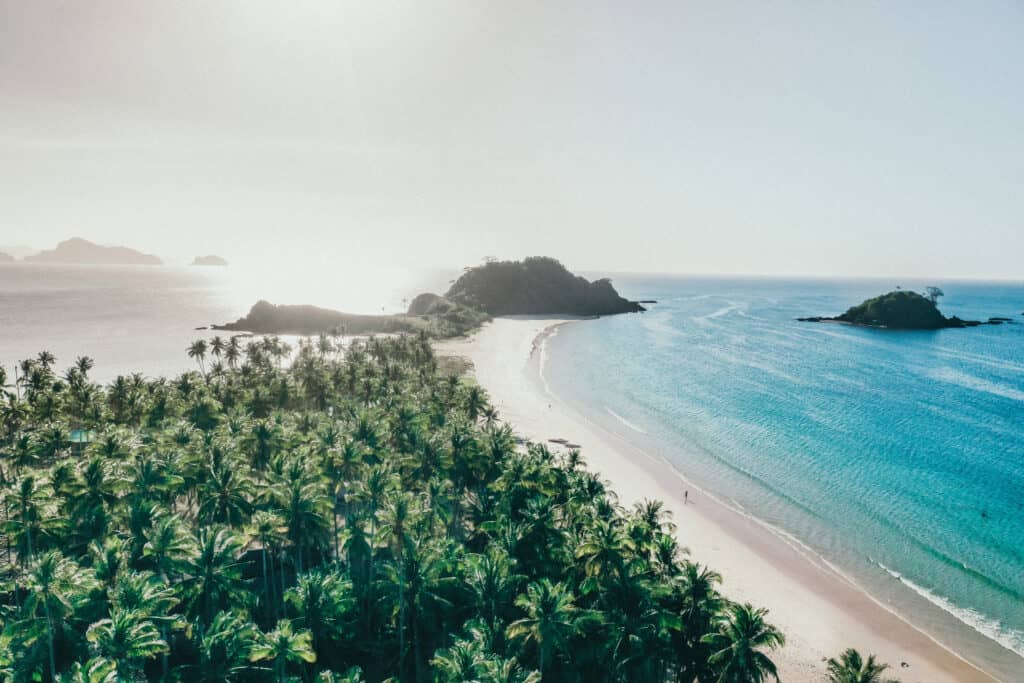 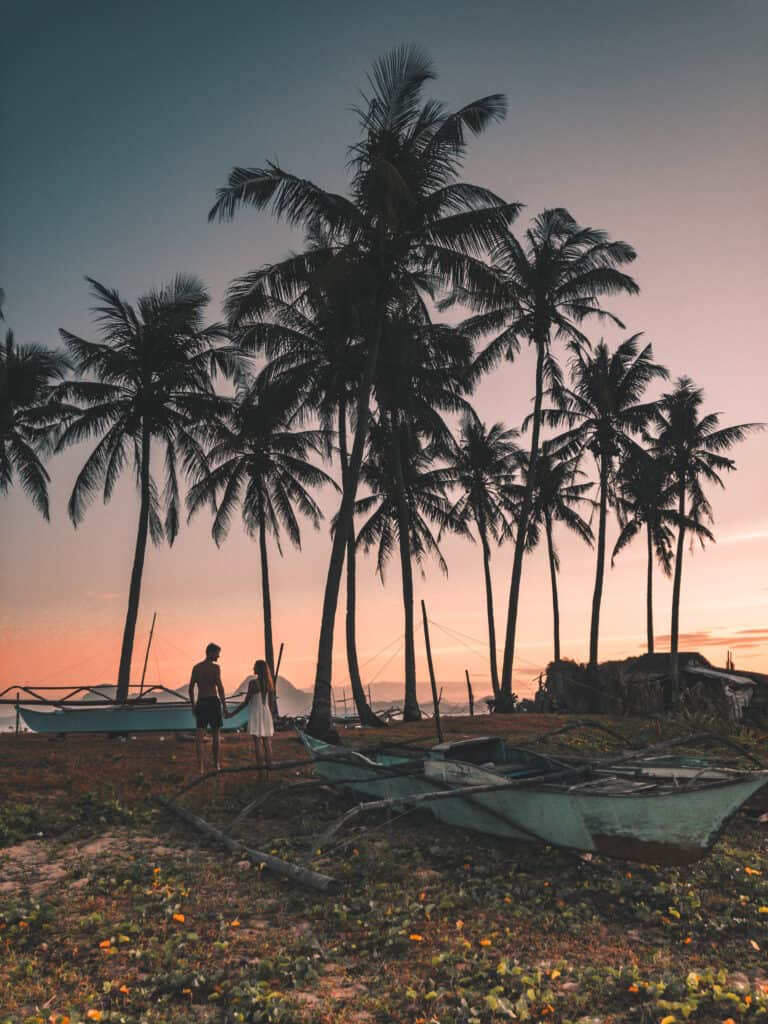 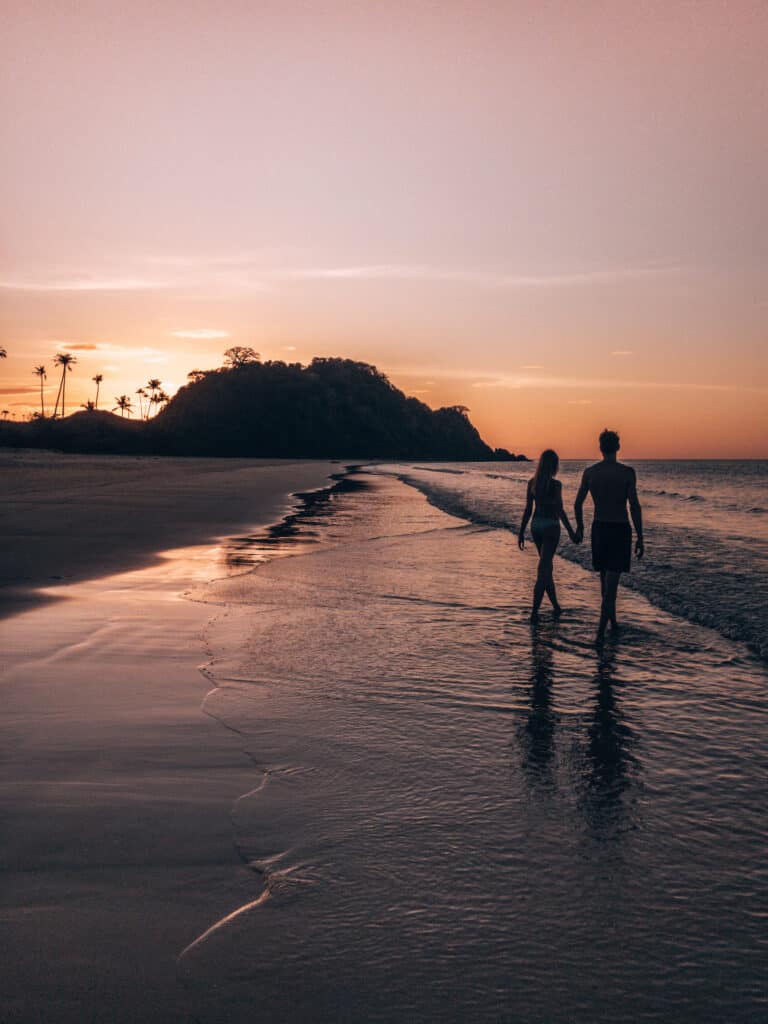 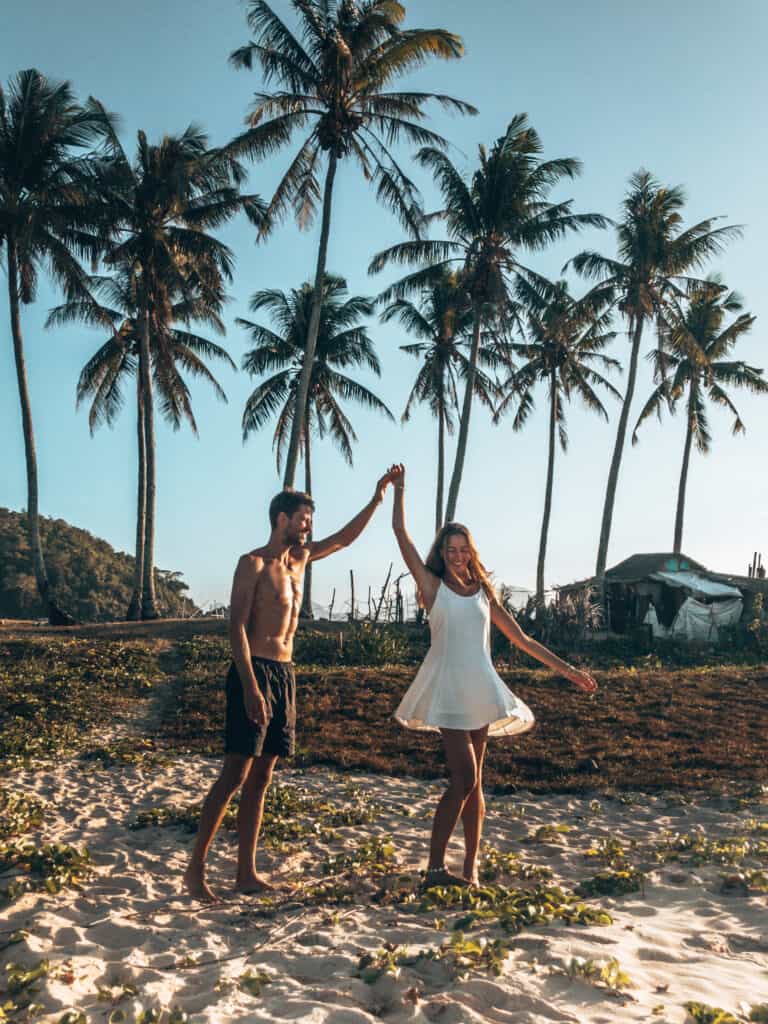 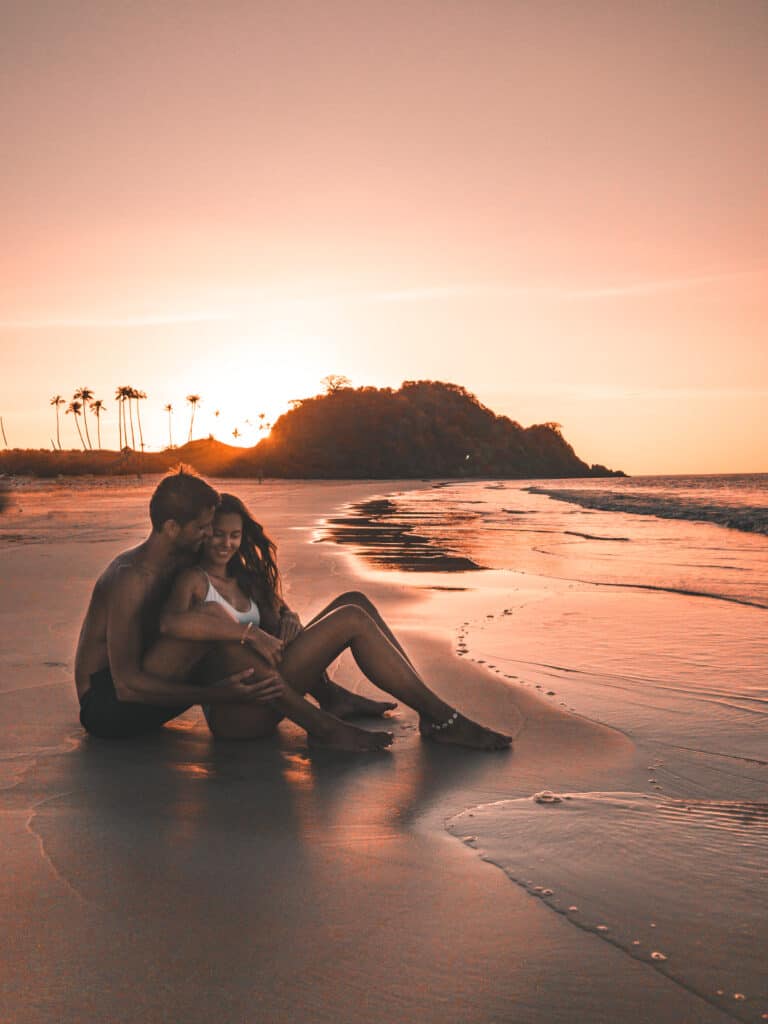 Duli Beach is truly a slice of paradise. It’s a long white sand beach with clear turquoise water and barely other people. There is only one small beach bar; the rest of the beach is remote and quiet. It’s the perfect beach to spend the day relaxing, reading a book and swimming.

The beach is located a bit further than Nacpan Beach but these two beaches are only 10 min from each other so you can easily combine both beaches on a day trip. 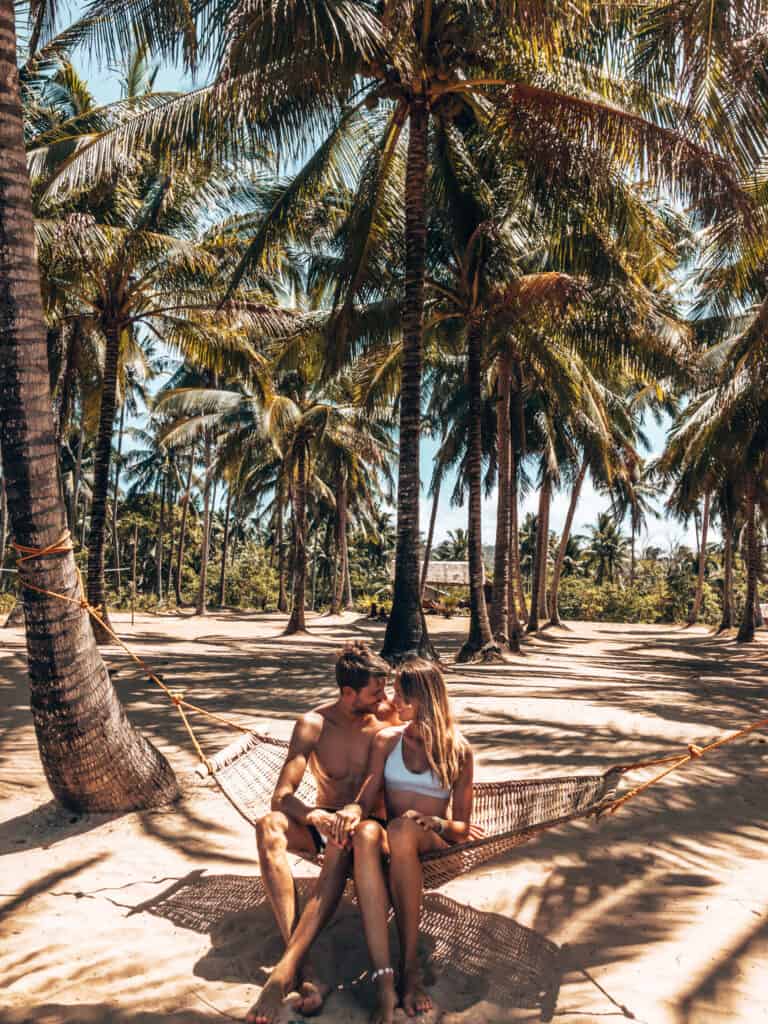 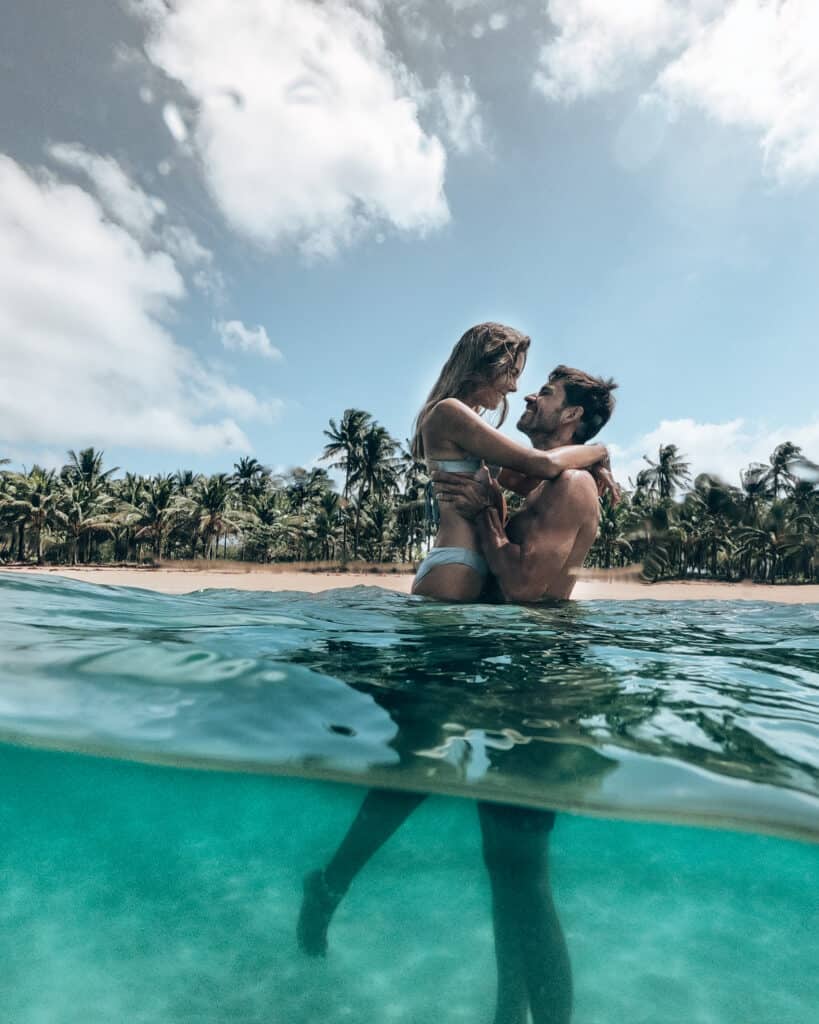 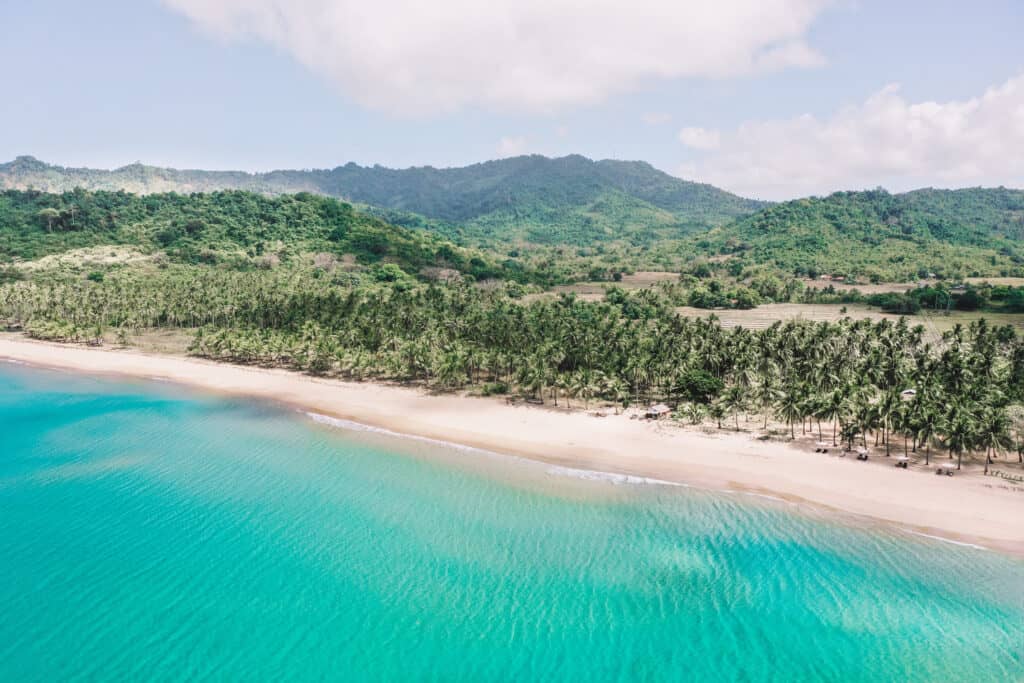 Where to eat in El Nido

We heard a lot how hard it is to find food in the Philippines as a Vegetarian / Vegan, so we were positively surprised that it wasn’t that hard anymore. The typical Philippino cuisine is indeed very meat and fish heavy, and for that reason, the local food was not really an option for us personally. But we found the following cute places to eat which are Vegan friendly:

Overall we have to say that for us, the Philippines was the most expensive country for food in southeast Asia. We spent, on average, 30$ for food per day for two. 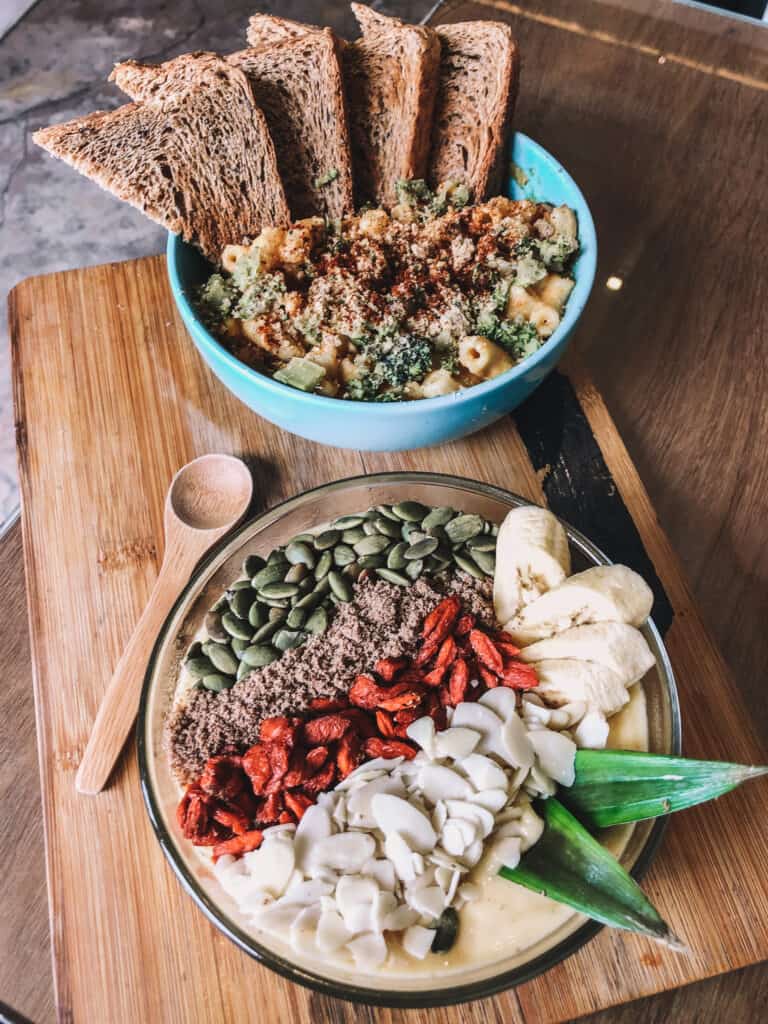 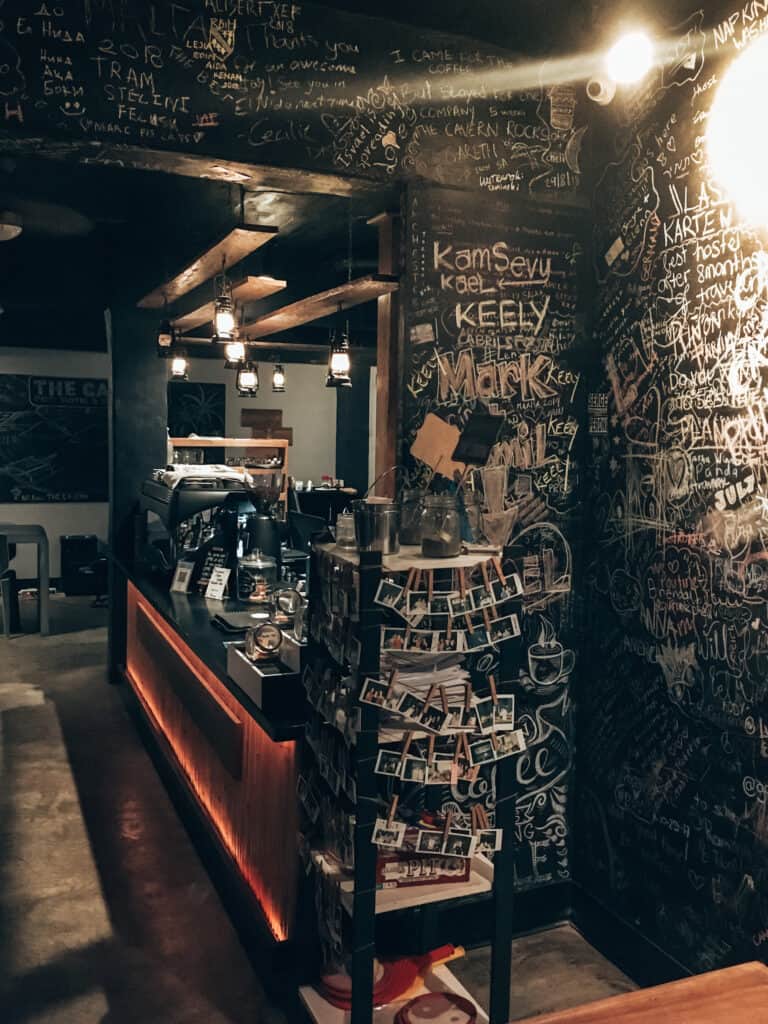 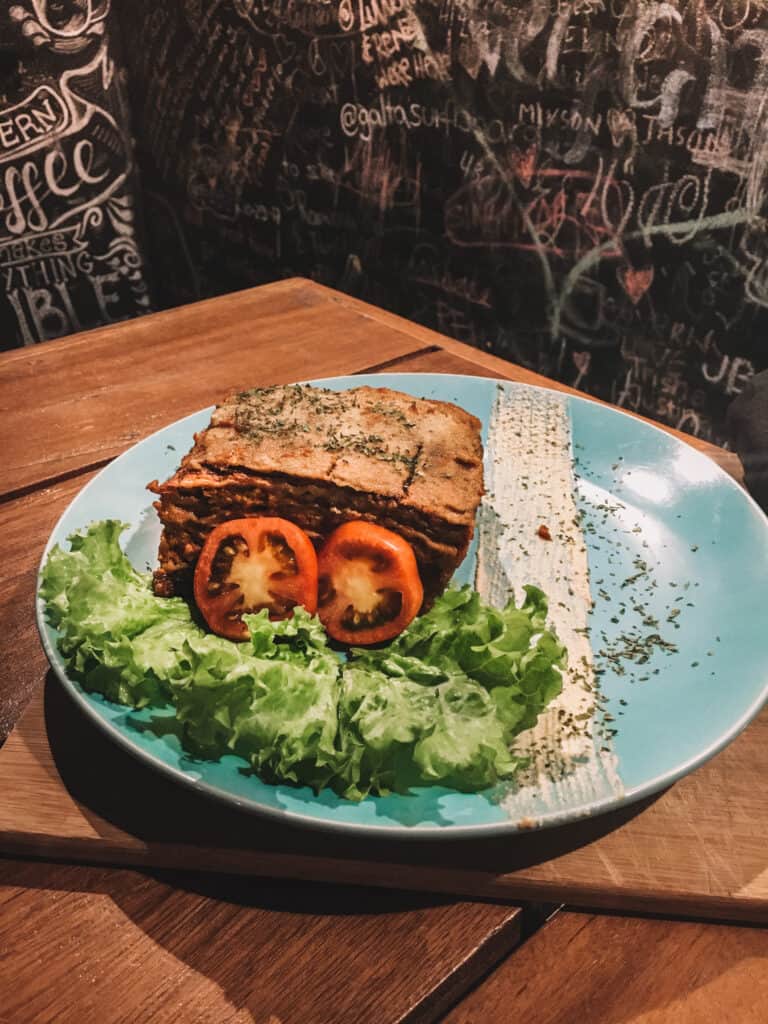 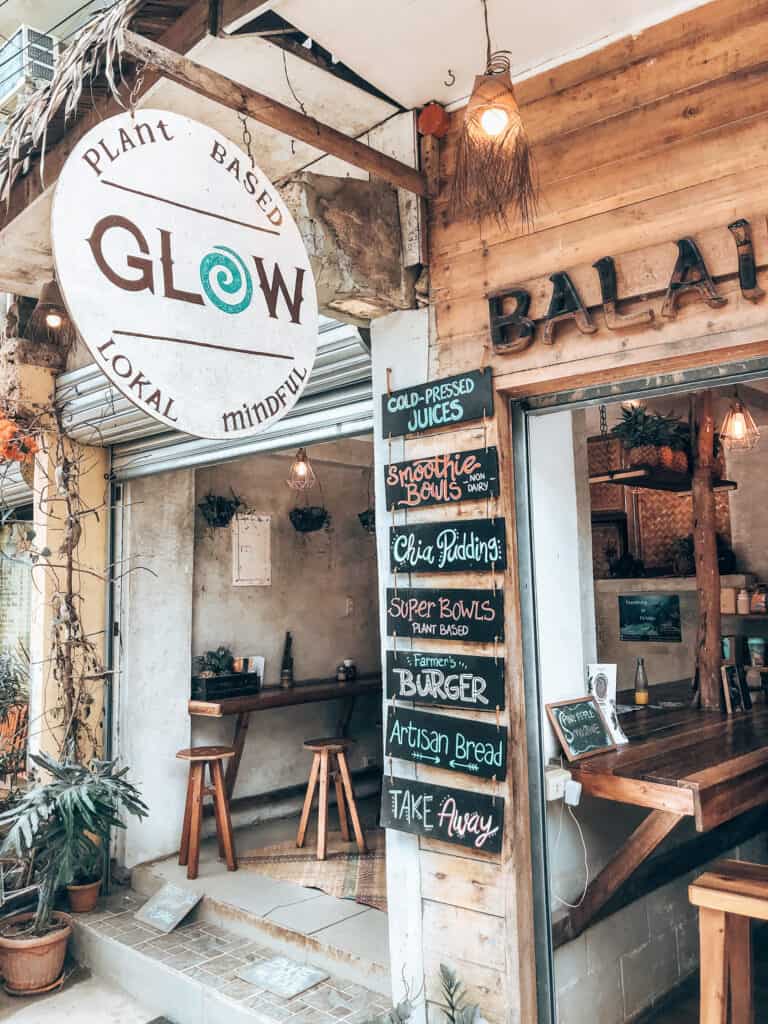 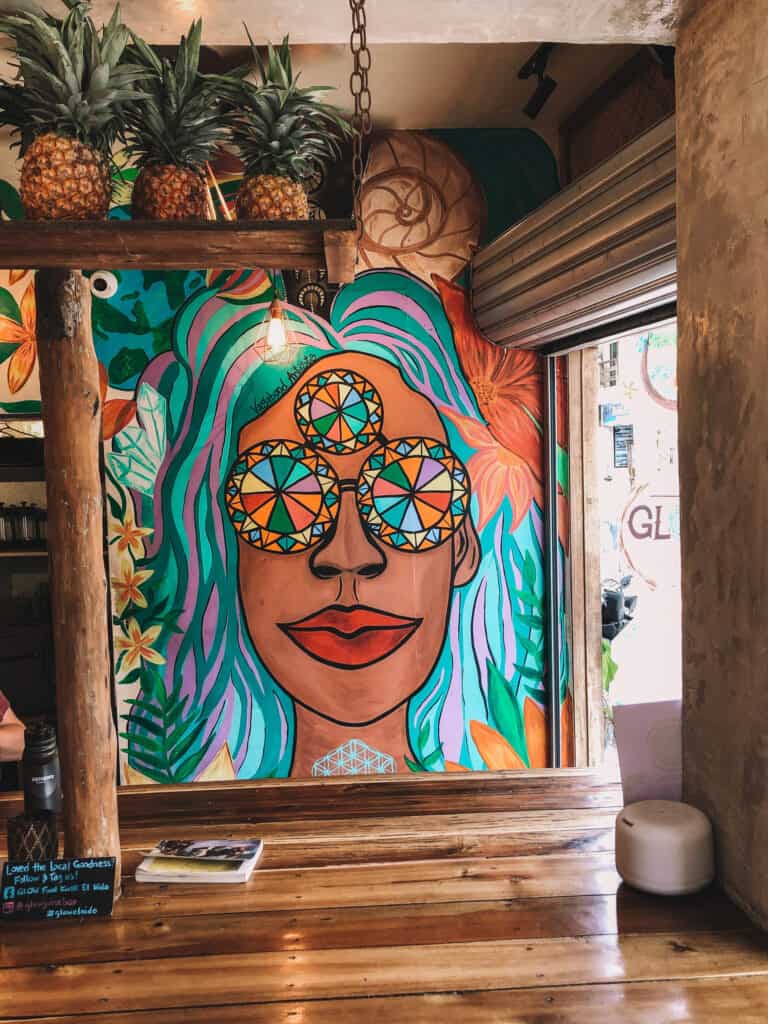 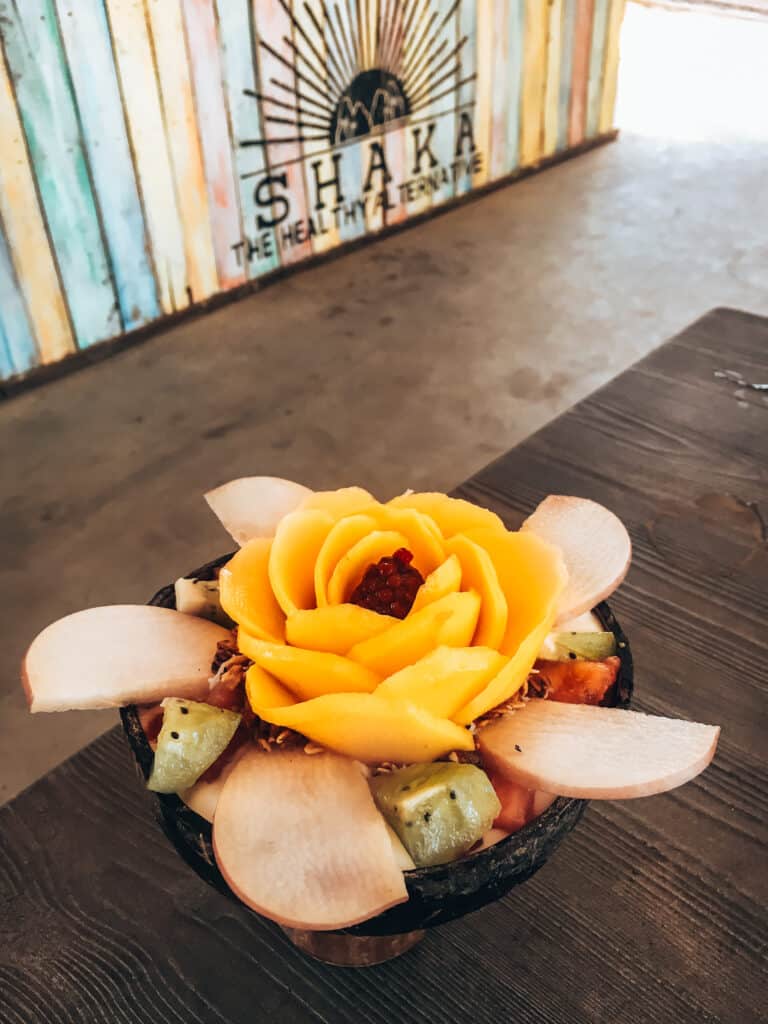 Where to stay in El Nido

We rented a studio on Airbnb because we wanted to be able to cook our own meals during the time we stayed in El Nido. We found this lovely studio called Libertad Apartement by Jan, who was such an excellent host. We can recommend staying here if you like to enjoy the local life because this place is around 10-15 min drive from El Nido town in a local neighborhood. We enjoyed a lot to buy food in the markets and cook at home. There is a scooter included to get around quickly.

Other lovely places to stay in El Nido are The Birdhouse and Frangipani El Nido.

How to get around in El Nido

The easiest way to get around in El Nido is by renting a scooter. It will cost you around 4$ per day. The streets in El Nido are good, and it’s easy to drive. We had accommodation which was a bit out of town, and that is why a scooter was essential for us. But if you plan to explore the best beaches in El Nido, then you will need a scooter too because most of them are far from town.

Internet access in the Philippines is only reliable near big cities. If you’re on one of the many small islands, having internet access may sometimes be a matter of luck. Even though many cafes and hotels offer free WiFi, this doesn’t mean you’re having access to the internet.

From our experience, the best you can do is to buy at least one, maybe two SIM cards, or having a hotspot like the one from Skyroam as a backup with you. There are two major telecom providers: Smart and Globe. We chose Globe and have to say that we multiple times ended up not having a signal, where we would have had it with Smart. But as it sometimes was the other way around too, choosing the right provider is a matter of luck. In retrospect, we think we would go for Smart the next time we visit the Philippines.

Getting a SIM card is easy, as many shops are selling SIM cards. Even in remote places. We got ours at a small booth at the airport, and we paid 1000 Pesos (around 19 $) for a SIM card with 21 gigabytes of internet data. Unfortunately, we could only use twelve gigabytes but never figured out exactly why. Toping up your SIM card is straight forward and can be done instantly at one of the many small shops. Just watch out for posters from Smart or Globe. In the case of Globe, four gigabytes of internet data costs 140 Pesos (around 2.70 $) with the GOSAKTO140 package.

On all Islands that we visited in the Philippines, we found that there is a ban on single-use plastic such as plastic bags, straws, cups, and so on. In all Supermarkets and even on the small local markets, they only gave us biodegradable bags. We loved this so much. We barely saw plastic pollution in the Philippines. People are much more aware of it than in other Asian countries. There are environmental taxes for most places you visit on boat tours so that these places can be protected and cleaned. On most boat tours, you are not allowed even to bring plastic bottles or other plastic. Please never leave anything behind except your footprints in the sand.

How to visit Black Island from Coron

Visiting Black Island is a perfect day trip from Coron. We share our experiences on how to get there and what to do on this paradise island.
Read now 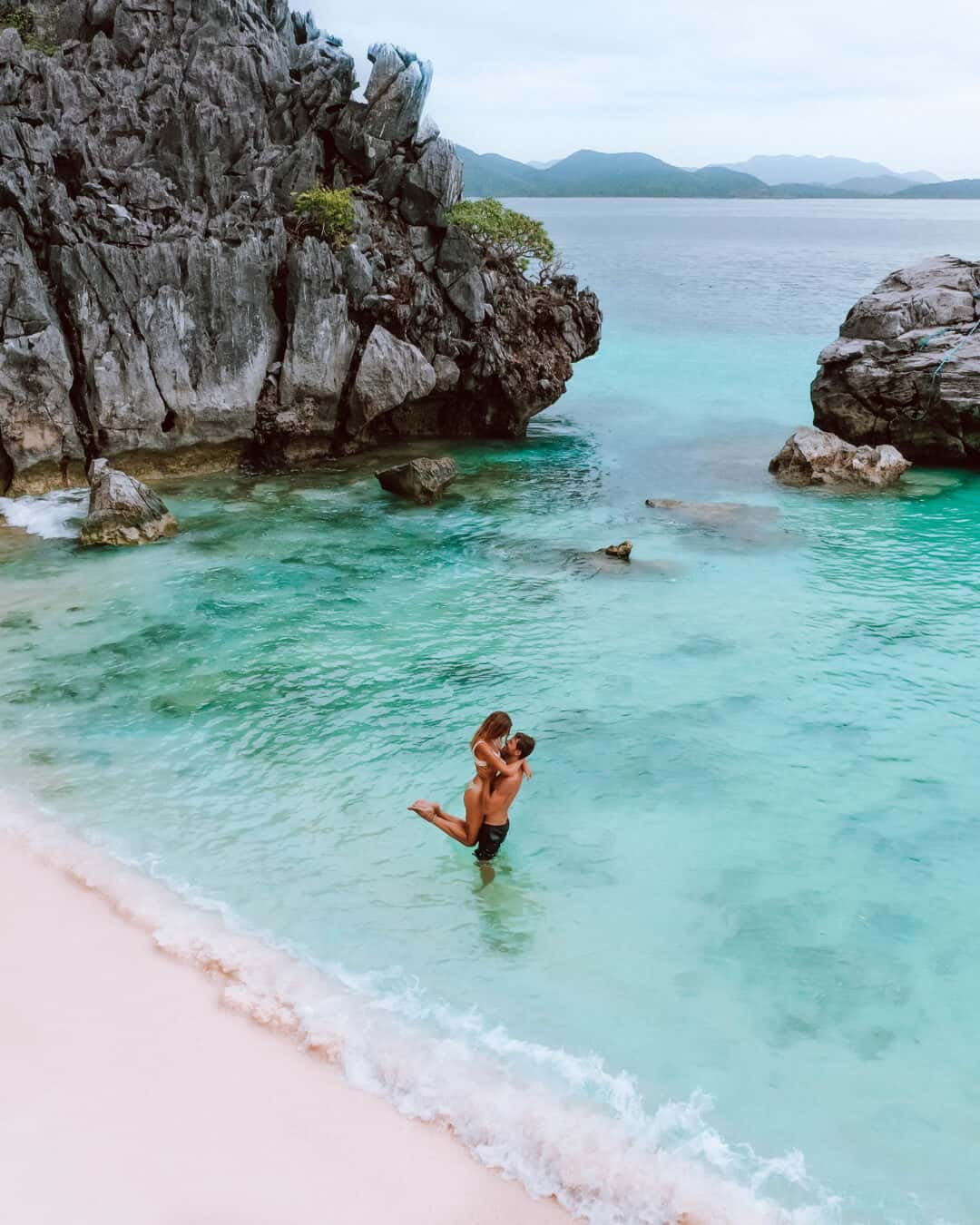 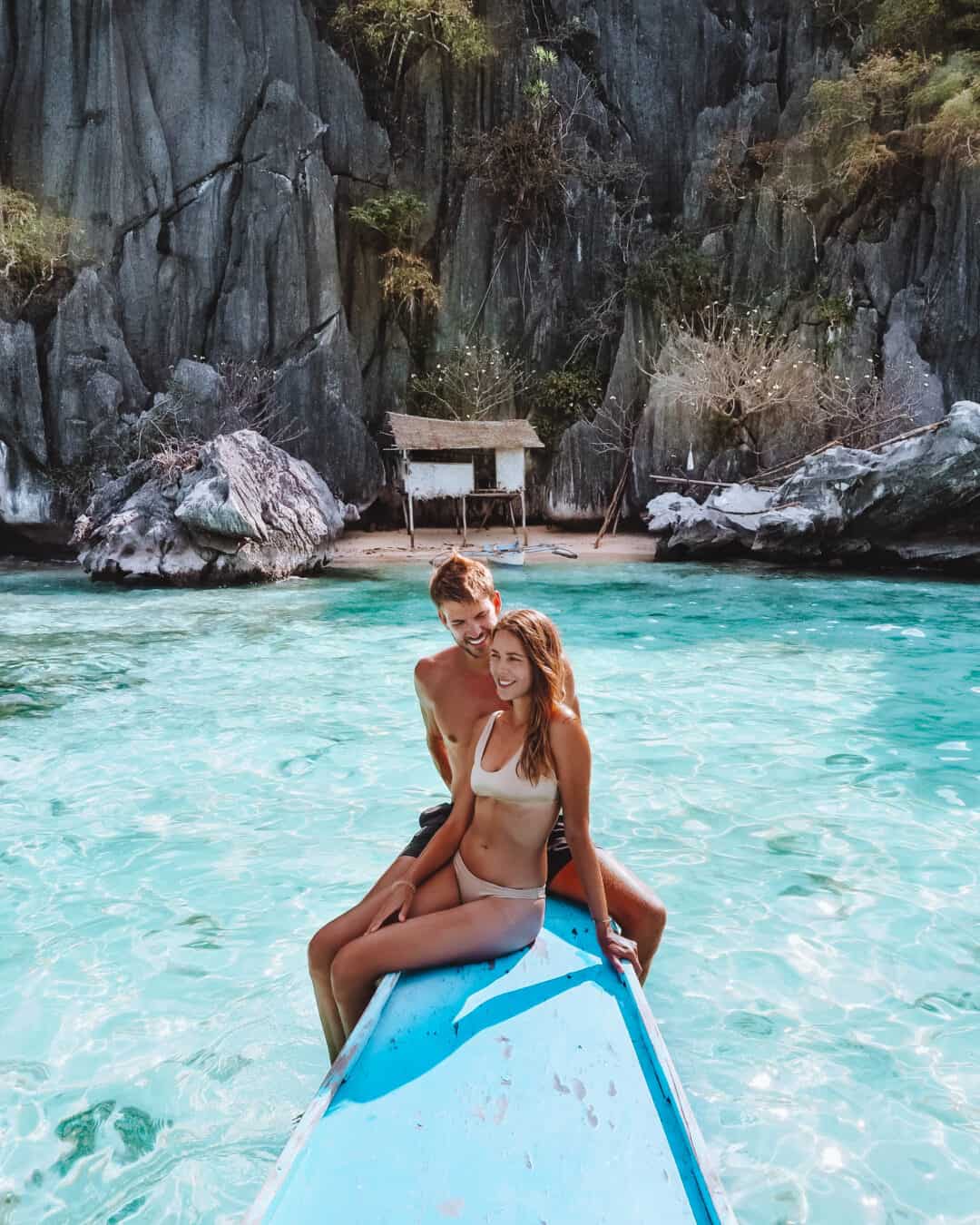 Coron has the most amazingly clear and turquoise water, small islands with beach huts, and lagoons. Island hopping with a boat tour is a must-do when visiting Coron.
Read now 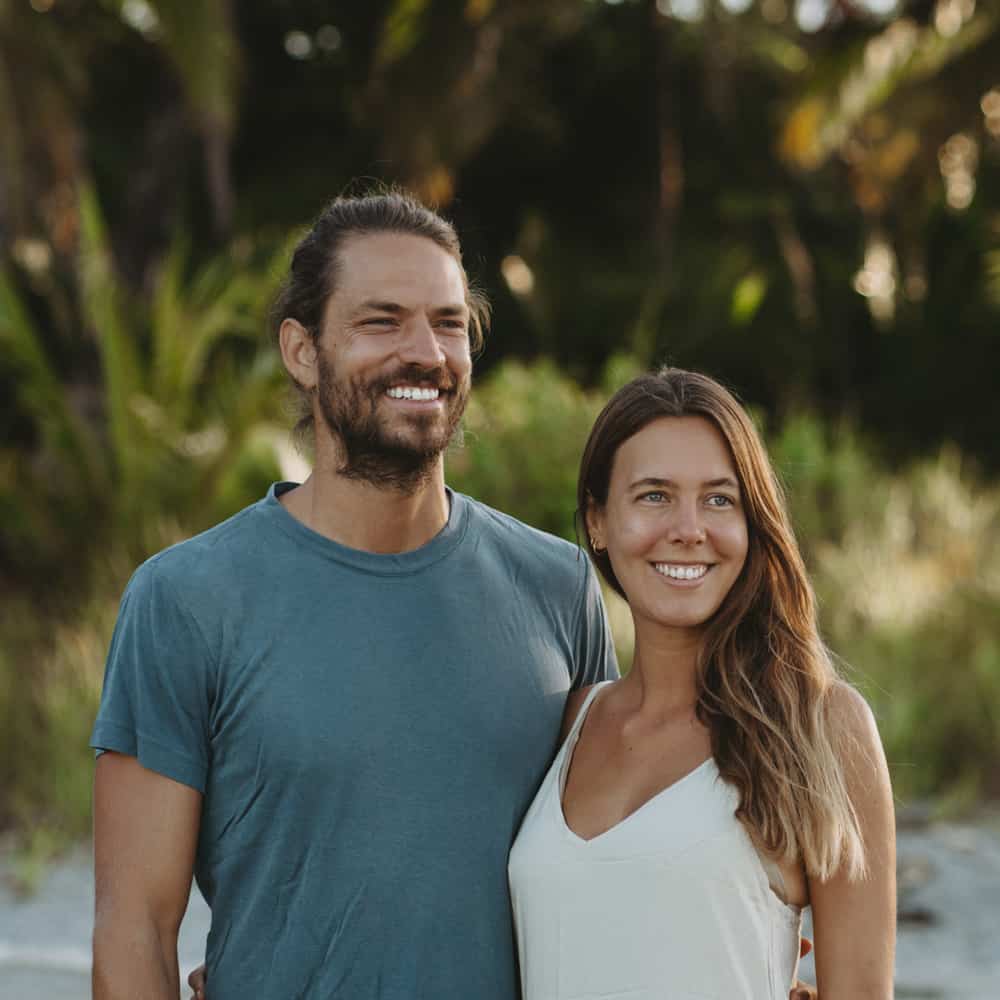 nice to meet you

We are Lea & Stefan traveling and discovering the World together. We both care much about nature and health what accompanies us on all our adventures.

Nomad Insurance is a global travel medical insurance that covers people from all over the world while outside their home country. You can buy it even if you are already abroad.

Receive inspirations for your next travels as well as tips for a sustainable and healthy lifestyle.

We respect your privacy and will never send you spam or give your data to others.

Made with Love by Lea & Stefan – Sun Chasing Travelers

We’re hosting a group trip thru Costa Rica and have put together an outstanding and unique itinerary.

Are you ready for your next adventure? Read more and get to know all the details. 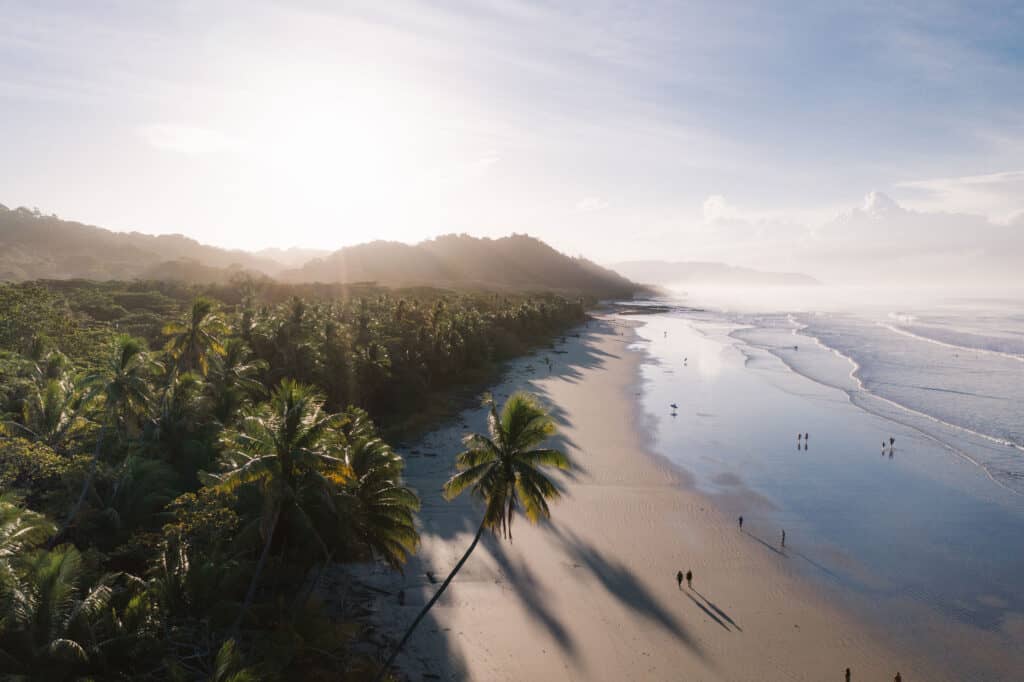